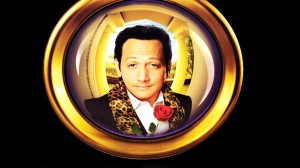 To hear him tell it, he was, at one time very successful but had fallen on somewhat challenging times. He made mention of it on several occasions and was training to become a fireman, which I found admirable and somewhat appealing. I had mentioned that my family was in the real estate business for over 100 years and that I came from a long line of entrepreneurs. My business was successful.

We began to talk on a regular basis, first through emails, then phone conversations. It got a little weird because suddenly he was telling me that he was in love with me. Having longed to hear those words from Mike, I think part of me relished it. Even though the words were coming from the wrong guy!

He was eager to meet but lived in Wisconsin. He was coming to a Chicago suburb and so we agreed to meet there. We decided to meet at Oakbrook Center which is an upscale shopping mall located in the town where I grew up.

I told him I needed to stop at the fountain pen store because I had to pick up a cartridge for a disposable fountain pen for my son.(My son was younger then and was having issues with his handwriting at the time. I thought this might help.)

The Pen Store sells pens in all price ranges including over $10,000. Shortly after greeting him, he made a point of showing me a $3000 pen which he apparently owns. And he starts to have the saleswoman, who is clearly eager for his business, show him pens in the $7000 range. This is where it began. He basically teased her into thinking that he might be back to buy the pen. This is a guy who has been complaining that he barely has (if you’ll excuse the expression) a pot to piss in. I thought perhaps he knew something that I didn’t.

The day we met it was a murky, cold, rainy day. I was not looking my best. Having been been stuck in traffic for over an hour and my hair getting curly from the rain my enthusiasm waned the longer I sat in traffic.  But I saw this meeting as a chance for love LOL! So silly…

I was a little surprised at having received a somewhat lukewarm response considering the passionate emails and phone conversations. He was preoccupied with beautiful pens I guess. At the time I attributed it to my appearance.

We were chatting as we left the store when he tells me that he wants to see to the new Microsoft store because that had just opened. He started looking at computers and again teased the salesperson into believing that he was in the market to buy. I’m beginning to see a pattern. He tells me that if he had the money THAT was the computer he would buy.

Next stop? The Apple Store! To this point he hasn’t bought anything. He just talks about what he would buy if he had the money. (How old is this guy? Six?) We walked into the Apple Store where you are routinely greeted by a staff member.

A young man in a blue shirt approaches me saying,”Good afternoon! Welcome to the Apple Store. How can we help you today?”

Jeffrey chimes in saying, “It’s okay. I want to show her the iPad. I’ve got it covered.”

Really? I told the young man I needed the charger for my iTouch to work in my car. And walked away from Jeffrey following the young man to the accessory wall. I bought the charger and pretty much ignored Jeffery’s  attempt at playing Carol Merrill on The Price Is Right.

When we left the Apple Store he started asking me about my business and whether or not I was hiring. I had no idea why he was asking! He asked if my staff was on commission. I told him they were. Then I foolishly volunteered that at this time of year they could make over $65 an hour for part time work. Maybe it was the real estate connection or the fact that he was Irish. (I can be a sucker for the latter.) I treated him as a fellow entrepreneur for some dumb reason. I was completely oblivious to his motivation when he started to ask about my income.

Our next stop was the Sunglass Hut. At this point I am no longer bored but getting pissed off. WTF dude!

I gave him the benefit of the doubt, thinking maybe he had to pick up something that was being repaired. No. He wanted to show me a pair of $300 Ray Bans that he would buy IF he had the money. What really irritated, me more than anything, was the fact that in the lousy economy he was playing with salespeople’s sense of hope. He actually asked her to put them on hold! To me that’s unforgivable. I told him I would wait outside.

He said, “You don’t want to buy anything today?” I told him I only met him at Oakbrook because he was going to be in Oakbrook. I suggested we go to Nordstrom Café and grab a bite to eat or some coffee and get out of the rain. He said he was too broke so I suggested we go Dutch. LOL.

Like a light at the end of the tunnel, I discovered that Oakbrook Center had a Lulemon store. That’s a yoga store. I was looking for yoga strap that was stolen and had been discontinued. He copped an attitude saying, “You go in. I’ll wait here. I don’t have any reason to go into a yoga store.”

I was in the store long enough to ask if they had the strap. It was less than two minutes. I came out only to find him gone. As I’m standing it in the center of the mall, looking around, feeling my hair turn to a curly frizz, I get a text from him.

Jeffery:This is a miss. I’m going to take off.

Jeffrey: You don’t have to be rude about it!

I told my son about this date and he laughed his ass off!

I said, isn’t that weird Mike? What was that all about?”

“Duh Mom! This asshole wanted you to buy him stuff! LOL! What a douchebag!”

Funniest part of all? When I joined Linked In a year later, he kept sending me friend were requests!