I don’t give a damn if you are fat, thin, obese, bone thin, if you have thick hair or thin, pin straight or curly, if you’re skin is white, pale, pink, brown, mocha, chocolate, flawless or you have acne. If you have big thighs or a thigh gap. Embrace it!!!!! Every single bit of it! Because you are you and that’s all that really matters.

I apologize for stating the obvious by saying our culture puts an inordinately high price on beauty, but I feel compelled to remind you because it’s just too easy to get sucked into that vortex.

I’m approaching 60 and have been blessed with a pretty decent life of many major delights as well as disappointments. Before I hit 60, I want to sound the alarm to young women everywhere saying, the BEST thing you can do for your health and appearance is to be happy and love yourself! That’s where it begins and ends.

If you can do that you will be lit from within. People will find you attractive and want to spend time with you which will only increase your happiness, (assuming they are also happy, because usually, like attracts like). The rest will come of its own accord or it simply won’t matter.

When I was young it drove me nuts when people pointed that tired old expression “Youth is wasted on the young” at me like it was a bullet in a loaded gun.

My response was usually, “What the hell am I supposed to do with that? I’m young. Besides, what other choice do I have? I can’t pretend to know about things I haven’t yet experienced. What the hell does that even mean? Leave me alone!” When being shot with this bullet I took it to mean that I was making ridiculous choices. Newsflash! No one makes ridiculous choices intentionally.

From the vantage point of a woman my age, I’m suggesting you interpret the bullet as “Embrace your youth! Don’t berate yourself for your mistakes. Learn from them and move on.”

Believe it or not, you’re supposed to make mistakes and learn from them. You might even make the same mistake more than once. So what! Try not to turn it into a habit and just keep moving forward embracing your resiliency while it’s still readily available to you. And it is!!! There will be things you think you won’t survive, but you will survive. Trust me.

Someone once counseled me when my son was only a few weeks old, “His little brain is like a blank piece of paper with no writing on it. Most of the writing (which is indelible) in the next 4 or 5 years, will be yours and your husband’s. But it’s mostly yours, as his primary caretaker. Use this information wisely and try to always keep it in mind.” She was right. It’s an awesome responsibility being a parent. Hopefully I did ok.

Now that you’re an adult, guess who has the pen in hand? YOU. Write with a flourish. If your writing seems illegible at times, that’s ok, so long as you can read it.

Who does it benefit to write negative things about yourself? No one. Don’t do it. It’s a waste of valuable space because the older you get, the more writing there is and the tougher it is to find space on your page. You don’t want to clutter it up with unnecessary crap if you can avoid it.

This is a picture of me in my junior year of college as a theatre major.

I hadn’t seen it in decades. Turns out, I was kind of cute. Nerdy…but cute. I had NO IDEA! I was too busy trying to live up to that 2% of the female population that fill the covers of magazines etc. I thought I was fat, too short, a big nose, fat butt gross thighs, breasts too big. etc! I used to go days on nothing but Tab (a popular soft drink before diet coke) and gum. I also sometimes lived on grapefruit and peanut butter. I even asked for a nose job for a college graduation present! (Luckily my parents declined.) I would KILL to have that body again!

I wasted entirely too much time thinking I could bully myself into trying to meet the current standard of beauty by berating myself into it. But it didn’t work because it’s not realistic and more significantly, it’s NOT IMPORTANT! never feeling

God forbid I should accept a compliment. No way! If I did, I usually went out of my way to counter it by pointing out one of my many physical “flaws”, often to the point of convincing the person I was right. I’m not all that after all. (This lack of self esteem is unattractive in anyone.) Don’t do it!

What I wouldn’t give to get that time and negative energy back. But that ship has sailed. Which is why it’s important to me to save you from the Flotsam and Jetsam that is self loathing or self-deprecation. As life sweeps you along, you will discover you have neither the time nor the energy to devote to such nonsense, I’m merely trying to give you a short cut.

Did you know that Marilyn Monroe saw herself as unattractive? Hard to believe. Right? 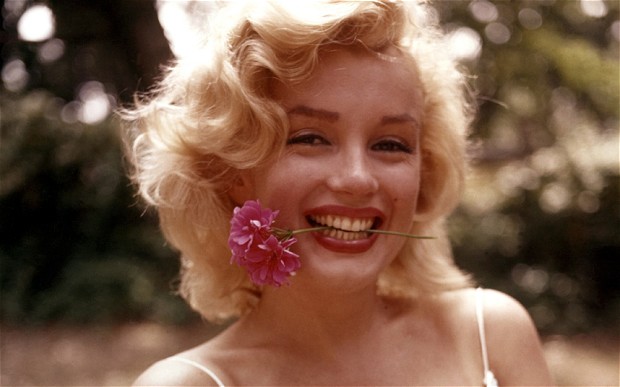 You are beautiful by virtue of the fact that you are a work in progress, a flower in bloom and all the complexities that entails..

I’m dead serious! People will see what you show them. Be happy and confident in who you are and people will be drawn to you to you, if you want them to be. The sooner you acquire this ability and perspective, the happier your life will be. I didn’t learn it until much later in life. But you can learn it now!

If I haven’t won you over yet, consider this. While a flower may become more fragrant as it ages, it begins to lose it’s pedals and pigmentation. As you grow older (not to be morose, but…) your hair will thin, your muscles and breasts may begin to feel the weight of time and gravity, regardless of how much “work” you have done. But I believe these things happen for a reason.

As you get older your wits should outdo your appearance. (It’s infinitely more interesting and fun anyway.) Also your priorities will change, particularly if you are blessed with children. So enjoy that youthful grin, those perky breasts, your crazy hair your and your supple skin while you’ve still got it! No matter what!

Bottom line? I don’t know a single person my age who does not look back at pictures from their youth without feeling astonished at how much more attractive they were then they ever believed themselves to be. Usually the phrase uttered is something like, “Damn! I had no idea. I’d kill to look like that now!”

For the record, I’m not one of those people who complains about her age and all that entails. What would be the point? Besides, my mind and body are both still relatively young and limber, so I’m happy. I embrace my age. That’s another story for another time.

If I can spare even one young lady from the burden of self-loathing or criticism I’ll be thrilled! No matter how long your life is, it’s really is too short to spend worrying about measuring up to someone else’s standard of beauty. Create your own standard and go out there and kick some ass!!! You’ve got this!

P.S. I wish like mad that I could record this song for you. But since I can’t at the moment, here’s the lady herself who wrote and exquisite tribute to ALL OF US! Check it out! It’s sure to give you a lift.

P.S.S While this also applies to young men, I believe women are more subject to this kind of scrutiny, which is the only reason I’ve addressed it to women. I Hope you’ll share this one with anyone who may benefit from reading it.

5 thoughts on “Sounding the Alarm to Young Women Everywhere!”