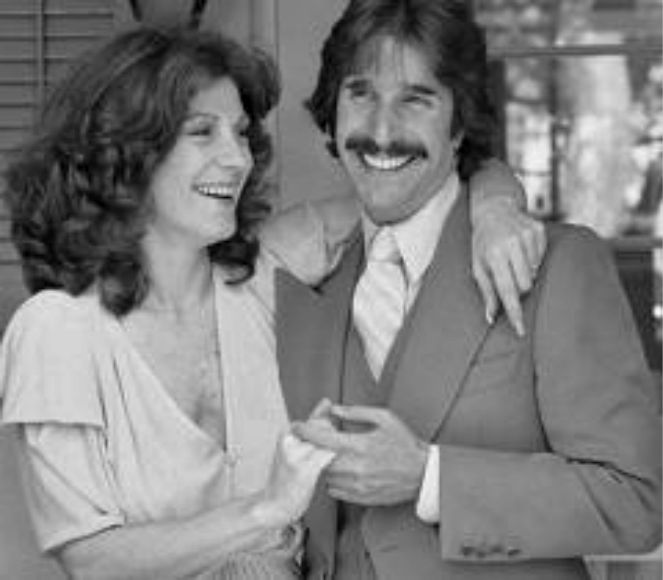 Henry and Stacy are an integral part of my getting through the NTI experience. We are in production for a show that was the result of a lot of improv work.

In the beginning, the director and I get on quite well. He says I remind him of Catherine O’Hara, (He directed her on SCTV.)

“She may have a hundred ideas and 98 or 99 stink up the place. But you have to hear all of them because one or two are Golden and no one else could have come up with them.” Okay… a little left handed. But Catherine O’Hara? I’ll take it!

Then one day he instructs us to stay in character throughout the day. I’m tired and I think it’s lame, so I decline.

I’m talking to the costume design instructor at lunch when the director approaches me.

“Stop playing the role of my mother”. He tells me.

“You don’t have to do the character work anymore. Stop being my mother!” He replies.

“I’m not doing the character thing.”

“Stop it! NOW! It’s not funny.” He is emphatic and clearly frustrated.

Clearly he doesn’t buy it. But it was true. That shit is WAY TOO “Actory” for me! He was coming unglued.

Considering the director was responsible for writing the show, this doesn’t bode well for me at all.

Henry and Stacy have been sitting in on our rehearsals. The director begins berating me. One day he stops the run through when I’m in the middle of a blackout. (A blackout is a very short scene which usually delivers a one or two line joke, then ends with lights out.)

“You think that’s funny?” That’s not funny. You’re not funny! This scene is cut!” He yells in front of the entire cast. And STOP BEING MY MOTHER!”

I can feel myself shrinking inside, as Henry races over and takes me by the arm.

“Come with me!” He says, as I fight back the tears. He takes me out of the room and I’m thinking, “Great! Now you’re gonna tell me I’m a ‘no talent’?

“I WANT YOU TO LISTEN TO ME.” When Henry Winkler uses his Fonzi eyes and looks directly into yours, you have no choice but to hear every single word he says.

“What?” I say sheepishly.

“You are extremely talented. And you are VERY funny! Don’t you EVER let anyone take that away from you!”

I felt like a dried up stinky old sponge that had just been doused with cool, clear, water.

“Then why is he taking away all my material?”

“I don’t know. I have no idea. But you CANNOT take his words to heart. In this business, someone will always try to tell you that you aren’t good enough. Don’t take it in! You ARE good enough! You have a gift.”

Then he went on to tell me about how his uncle kept telling him that he should go into the family business instead of going to Yale Drama for grad school. They told him he was too short to be a leading man. (That shocked the shit out of me. He was one of the most virile men I’ve ever met. In addition he has heart of gold!) He refused to listen.

He told me the story of his audition for “Happy Days”. Like most actors, Henry is not as tall as he appears on the screen. He had become somewhat accustomed to being rejected because of his stature. The role called for a different “Type”.

He said, he made it his goal, in this audition, to be as intimidating as possible from the minute he walked in the room. He succeeded by using that piercing glance of his. He said it was his goal to force someone to sit down just by intimidating them. Clearly, he succeeded. BTW, “The Fonz” was only supposed to be a minimal character on the show. He parlayed it into icon status.

Our show was one week out from going on tour when the director sent a note to an administrator saying that he when he was creative he was a God. The show was running four hours long at this point and our saintly director had evidently suffered a nervous breakdown. (No doubt brought on by his 21-year-old mother.)

We never saw him again. (Actually, I met him for lunch in Chicago a couple years after graduating. We mended fences. He was directing Jim Belushi in “Sexual Pervsersity in Chicago”. It later became a film with a different title starring Demi Moore and Rob Lowe.)

Henry swooped in, gave me back some of my material, and cut the show down to a running time of 100 minutes.

We said our “goodbyes” shortly before going on a tour of various schools, ending in Manhattan.

My parents came out for the show along with my little brother. I got to stay at the Plaza when they were in town. (Although walking into the lobby wearing overalls and carrying a toolbox with my name and the word makeup painted on it, I almost got booted. Thankfully my parents showed up just in time to prove that I did indeed belong there.)

At the end of the session, I drove home with my friend Mitch. (BTW, he is the guy who told me that if you enjoy kissing a man after he has gone down on you, it means you’re a lesbian. I actually believed him! But that’s another story.)

It took us two days to get home. I got a speeding ticket in Ohio for going 98 mph. (II haven’t been back since.)

We pull into the driveway and I’m unpacking the car when my youngest brother Mark, comes running out and says…

“COOLS! (my nickname) Henry Winkler is on the phone!!”

I made it a practice to go away as often as possible. Not only to get away from the chaos that was my family, but also hoping that I might be missed. In a family of six kids, the only time anyone notices your absence, is when it’s time to do dishes, and you’re left one man short.

Point being, the teasing and sibling rivalry never skips a beat, no matter where you’ve been, or how long you’re gone.

I walk through the front door and head to the kitchen where Mark hands me the phone.

“Oh my God! How are you? I thought my brother was teasing. I just pulled up. I just got home from Connecticut. Mitchell is with me.”

“Say Hi. Listen! Stacy and I are getting married and we want you to be there.”

“Thanks. We want you to come out for the wedding.”

“That’s so sweet of you. But where would I stay? I don’t know anyone in California.”

“Stay with us. It’s going to be low key. We’ve been living together for a while.  Stacy has been married before and her son lives with us. Just stay with us.”

“I just got back in town a couple minutes ago. I’m so happy for you guys. I love you both so much! I have to talk to mom and dad and see what they say.”

For the life of me, I have absolutely NO recollection as to why I did not attend that wedding. I vaguely recall some discussion about it at the dinner table that night. My parents must have said “No”. It would be years before my dad would have much regard for acting as a profession. Admittedly, it was all a little intimidating to me.

They were married that summer in 1978. And have been happily together ever since.

Henry and I never spoke again. (It may have something to do with a letter I wrote to him when I had too much to drink. I slept with someone, I believe was a friend of his, and had no idea he was married! I never watched the guy’s show, in spite of its popularity. I never should have mailed it!)

Also, this was well before cell phones and emails etc. While it may seem like a massive blunder not to have gone, I truly believe everything happens for a reason. I suspect had I gone to the wedding, my life would have taken a different course I can’t imagine my life being any better without my son and my soul mates, Mike and Joe. I can honestly say that I don’t regret my decision.

Years later I sent him an invitation to my wedding. He wrote a lovely RSVP and cautioned my soon to be husband that he “had better be good to Blossom, or he would have the Fonz to reckon with!”