I was a mere 17 years old, when I found myself sitting alone in the dining room at Hotel d’Albe. It’s my first week at the American Conservatory at Fontainebleau. Under different circumstances I might be uncomf

ortable seated alone in a dining hall of other students in a foreign country, but not this time.

It’s not because most of them are much older and either teaching or working on supplemental degrees at Yale, Julliard and Eastman. No. It’s because I feel like a fraud who is here under false pretenses.

Having arrived a week earlier as a piano student, much to my terror, I learned on the eve of my arrival that we are required to play for Mlle Boulanger in order to place us with instructors.

But why? She heard the recording that my teacher sent and I’m here. I was certain that I would be shipped home toute suite as though my acceptance was all a big mistake. While the other students are busy working on concertos I’m playing simpler sonatas and fantasies.

When the frightful day arrives, two students are selected by Mlle to remain beyond the summer program and study with her in her Paris apt. I was one of them. I naievely declined. (But that’s another story.)

What I want most in the world is to be an actress who sings. (My first love is singing. But my family frequently tells me I can’t sing worth a damn and asks me to please shut up.)

Ever see the film “The Competition”? It very aptly portrays the temperament, intensity and eccentricities of classical musicians, particularly those preparing for piano competitions.

I hail from a completely different planet. If you don’t win these competitions, what are your choices? Teach? No way! I’m too hammy for that. I want to be in front of an audience and able to see people’s faces when I perform. In addition, the interpretation of classical music is somewhat restricted by it’s very essence. I hate being restricted.

I feel guilty about Mlle’s offer and fearful that the other students will see me as wasting the school’s time and extraordinary resources. For awhile I keep it and my true aspirations, to myself.

As I sit gazing out the window next to me, having breakfast at a small table for two, with my chocolat chaud and baguette, I look up to see a petite, older woman in a beautifully tailored champagne colored suit wearing white gloves and a pill box hat, approaching me. Who is she and why is she here? What’s with the hat and gloves? (The dining room and hotel are not open to the public while school is in session.)

She sits down across from me at my little table and introduces herself offering only her first name. She has a very slight hint of a German accent and she states her name with the nonchalance of someone who is well acquainted with fame, but thinks little of it. I’m left wondering her last name. She never volunteers it. This is unusual for an older adult.

I couldn’t help but notice her look. In an era when blue jeans, short skirts, maxi’s, floppy hats and bellbottoms are all the rage, she reflects a very well tailored suit and white gloves (which she never removes while dining) in the summer heat no less!

At first I’m not sure if her look is by choice or necessity. The latter makes little sense, as her clothes are impeccable, not thread worn, and she is very carefully coiffed and put together. It’s as though she stepped out of another era. Is she an instructor? If so, why isn’t everyone flocking around her?

She would have stood out regardless of her age or attire. In a roomful of students treading the waters of their own intensity, she floats. In spite of her years, she has an almost minx like quality about her. There’s a very youthful twinkle in her eye that contradicts her true age and occasionally she eludes to my youthfulness and it’s benefits when it comes to the opposite sex. She exuded the energy of a sexual sprite, if such a thing were to exist.

She notices my small stack of music. On top, was an exercise book written by Isidor Philipp. It was a French edition belonging to my mother, an exquisitely gifted pianist. My teacher wouldn’t allow me to play Philip until she determined I was ready.

Although I’ve never gone past the first few exercises, I am quite pleased with myself, playing with the big kids until she says wistfully, “Oh…you have Big Daddy Philipp I see!” She smiles as though she knows all his secrets.

“I knew him well.” Her grin is one of a person caught in reverie, as though they shared some intimacy of some kind…any kind.

Who is this woman? She knows Isidor Philipp? I assumed he was a contemporary of Chopin’s! His exercises make Hanon look like child’s play.

“So you are a piano student or composition?”

“Piano”, I reply trying to adopt an air similar to the others. No doubt, she saw right through me.

She inquires what I’m working on. I reply, “Beethoven, Mozart and Shubert”.

She spies my bright blue book of Vocal Selections from “A Little Night Music”.

What is this book?”

“That’s a book of music from a new Broadway show, called “A Little Night Music”. I didn’t know this lady so I didn’t care that she just opened my Pandora’s box!

“Ein kleine Nacht Musik”, like Mozart. She smiles. “Is it about Mozart?”

What is she talking about? Of course not. Oh my god wait! I didn’t know that’s what “Enie Kleine Nacht Musik” meant . That’s pretty cool.

I begin to gush about my love of Stephen Sondheim’s music and what an important impact I believe he’s making, in spite of the fact that he does not play or write classical music.

“That’s not so important. My friends George and Cole wrote wonderful music for the stage. It’s a gift. George also wrote the Rhapsody in Blue. He wanted to study with Nadia but she turned him away saying he had something very special that she didn’t want to change him in any way. We lost him too early. So sad. He wrote some wonderful music while he was in Paris.”

Wait! She knew Cole Porter, George Gershwin and Irving Berlin? I had a crush on Gershwin because of this piece. It’s my dream to one day learn Rhapsody in Blue.

“Of course! I knew them all. They were all great friends, George, Cole,  Noël and Irving.”

Now I’m just embarrassed. I have no idea who this lady is. Already feeling like a fish out of water, I don’t dare flaunt my ignorance by asking. Nor do I wish to insult her by not recognizing her.

“I love to sing!!! But I’m here to study piano. My family says I can’t sing though. But I sing anyway. I’ll prove them wrong one day.”

“Of course you will, if that’s what you want!” She replies. I don’t know who this lady is, but I like her.

I notice the dining room is clearing out quickly and realize I need to depart or I’ll be late for my solfege lesson with Mlle Dieudonne.

I gulp down what’s left of my chocolat chaud, (which is actually “froid” by now.)

“Well, I’ve got to run or I’ll be late for class. It was very nice meeting you Hildegarde.” She extends her spotless, white gloved hand to me. I grasp it momentarily as we smiled at one another. I swiftly grab my music and briskly make my way to class at the palace down the street.

I like her!!! Alot! I hope to see her again. I’m so tickled that of all the students, she chose to sit and have breakfast me.

We meet again for lunch. Only this time I joined her as she was seated alone. I feel somewhat simpatico, as though we’re kindred spirits because we are the only two in the room who don’t suffer from a touch of musical snobbery.

This time we spoke of more worldly matters, like men. I remember her eluding to men and how to handle flirtation as well as how much fun it was to flirt. This surprised me. Was my curiosity about men that obvious? What surprised me even more was her willingness to speak of such things with the wisdom of someone who enjoyed the attention of many men but always remained in control.

She asked if I had ever sung in the dining hall in front of the group after dinner. (It was not unusual for someone to get up and play something they were working on. There was a grand piano on a raised platform for that purpose.) She suggested I get up and sing one night.

“Well dear, if this is what you want to do, hadn’t you better get started?”

(Eventually, I took her advice. But that;s another story as well.)

That night I asked one of my suite mates, Donna, if she knew of a lady named Hildegarde who wore white gloves and knew Gerswhin, Porter, Coward, etc.

She chuckled and said, “Sure. She was a cabaret singer who also played piano in the 30’s,and 40’s. She always wore gloves. It was her thing. A bit eccentric, I think. ” 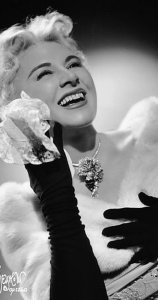 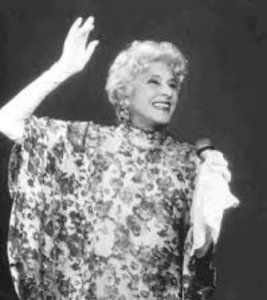 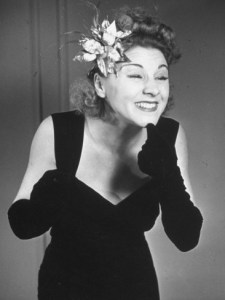 “She was here today. I had breakfast and lunch with her!”

Donna just smiled and began telling me about her progress on Mozart fantasy in C minor.

A few days later, I finally got the courage to sing in front of the other students in the dining room. I sang Bette Midler’s version of “Am I Blue” accompanied by Emile Naumoff, a 12 year old protégé of Nadia’s. (He is now a world renowned pianist, conductor.) It lit me up to learn that those who didn’t know me, thought I was a voice student! (This, in spite of my familie’s objections to my singing.) Once that happened, there was no turning back.

Recently I’ve had the great pleasure of having a 19 year old French exchange student stay with me for 3 weeks, causing my memories of my days at Fontainebleau to flood my brain as if it were yesterday.

I’ve since learned that to characterize “The Incomparable Hildegarde” merely as a cabaret singer of the 1930’s and 40’s is a massive understatement. Among other things, she was the first celebrity to use her first name only. She was an international star who crashed through numerous glass ceilings, paving the way for women in business, culture and the arts.

What tickles me is the fact that out of an entire room of people she chose the one girl who wanted more than anything, to sing and act.

Which I did for awhile, until the tide of life swept me in the direction of selling millions of tickets to other people’s performances. The current has shifted lo these many years later, and I’m back on course. I’ve done a couple shows at the Skokie Theatre, but now I want to produce myself. Bless her heart, I can still see her sitting across from me, urging me on. The way I see it, IT’S NEVER TOO LATE TO PURSUE YOUR DREAM! I’m sure she would agree. She lived to be 99 and played Carnegie Hall at 80!