Lately every Tuesday around here has been “Fat Tuesday”.

Yesterday I spent a good deal of the day bemoaning both the interminably long winter we are experiencing in Chicago and its effect on my body. A clusterfuck of events caused me to stop working out months ago. I knew I had put on weight. But after measuring an increase of 20 pounds over a month ago, I was loathe to get back on the scale to see how badly things had spiraled out of control.

Yesterday I got on the scale and was mortified. I’ve decided this shit has to end. BUT HOW?

Previously I was motivated by love to lose weight. First, it was my newfound love of life after Mike kissed me. Then it was, being in love with Mike. When that landed me flat on my keister, it was the promise of love with someone else. But right now, I don’t really want anyone else. I have too much to do.

I’ve recently started watching the Netflix series, “Orange is the New Black.” It’s outstanding! Based on a true story, it’s about a Waspy debutante who does a year in a minimum-security prison for money laundering. As an inmate, she’s trying to get the running track reopened, explaining to prison staff that 30 minutes of walking a day would cut down on prison medical expenses as well as depression amongst the inmates.

We learn that she is finally successful when we see one of the depressed inmates, (a former track star) running on the newly opened field for the first time. When she starts to pick up speed, the look of joy on her face hit me like a beam of light shot through my body! I GET IT!!!

BTW, I have my first two hour gig (in 30 years) coming up March 21, at an intimate tea house owned by an internationally known and recognized rock star. I intend to lose 10 pounds between now and then. I pray that I still have some muscle memory left!

So in the name of accountability I am posting my prior “selfies” which helped to motivate me onward. I achieved these ends WITHOUT DIETING, but with lots of exercise.

Too many buns in that oven…this was 2 years ago. 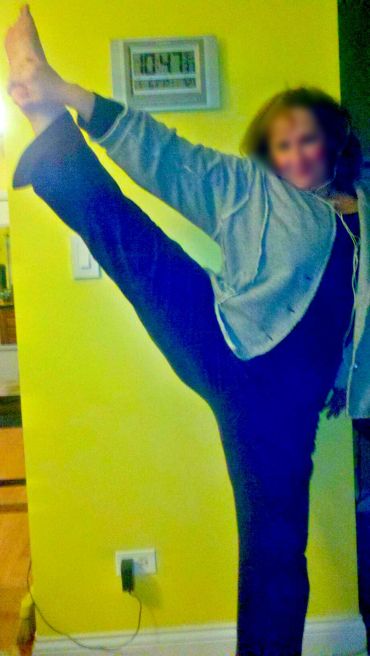 I’m not sure if I’m ready to post my current “look”. Depends on how I feel after posting these. Some are pretty funny in retrospect…

I REMEMBER the EUPHORIA, the JOY, the CONFIDENCE, the SENSUALITY, the FLUIDITY AND EASE OF MOVING THROUGH SPACE and I WANT IT BACK!

I need to get in the habit again. If I post my progress and how it’s effecting me on a daily basis, that is a form of accountability, whether it gets read or not.  Much like the pics, it will serve as a reminder not to ever go down this road again. And if I am required to, at least I’ll have proof that I can! If I could do it before, I CAN DO IT AGAIN! Only this time I intend to go farther.

If you are on a similar journey yourself, please don’t hesitate to “Chime in”. We can support one another.