I’ve been into watching documentaries the last couple of days. (American Experience “The Abolitionists” on pbs.org) 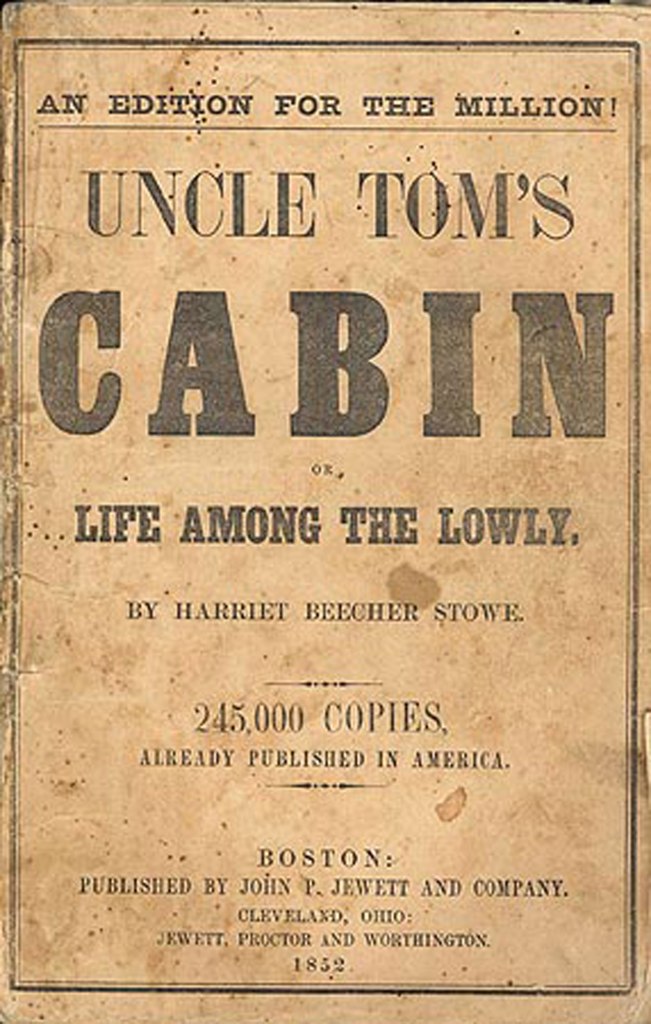 I’ve never read “Uncle Tom’s Cabin.” Frankly, I’ve only heard of it in negative terms because of the stereotypes of the characters.

Imagine my surprise when i discovered it was the best-selling novel of the 19th century and the second best-selling book of that century, bested only by the Bible. In the first year of it’s publication, 300,000 copies were sold in the United States; one million copies in Great Britain. Most significantly, it was considered the single most influential piece of literature ever written in the United States!

I studied the Civil war in high school and I don’t recall this book being given it’s due in history class. (Perhaps because my history teacher, while very effective when discussing battles , was best known for his accomplishments as the football coach.)

While it’s author Harriett Beecher Stowe was a staunch abolitionist, it was not until the summer of 1849, when she watched helpless, as her 18 month old son Charley died of Cholera, that she began to conceive of the pain enslaved mothers felt when their children were ripped from their arms to be sold as property.

It was her anguish and pain at the loss of her own child that created her empathy for and desire to advocate for the children of others.

While it is unlikely that these were his words verbatim , it is said that upon meeting Lincoln, he greeted Beecher Stowe, saying, “”So you are the little woman who wrote the book that started this great war.”

What I find so compelling is, Stowe’s impact on the war and slavery was not the result so much of politics, religion or the economy. all those things played a critical role, While there were many great fighters in the cause under the umbrellas of politics, religion abs economy, her charge was much more universal and tangible, the cause of a mother’s need to love and protect her child.

The one thing she shared with all mothers everywhere, regardless of race or socioeconomic status, was her deep understanding of the bond between a mother and child.

I had no idea! Not only to learn that this profound love for her child and her own unfathomable sense of loss helped to change the world, but that it was a mother’s love and the empathy she felt for enslaved mothers, which catapulted and had the *single greatest impact on the anti-slavery movement. This, coming from a woman at a time when all females were still considered chattel (property).

Later that evening I watched another documentary called “Blackfish” produced by CNN. It was also very compelling! It was about the capture and captivity of killer whales. It’s very sad and disturbing to watch.

Evidently whales remain in their family units their entire lifetime. The babies never leave their mothers, even as adults.

At one point in the film, it’s horrifying because the mother screams in anguish for days on end when her baby whale is transported from one Sea World location and moved to another across the country. She had never exhibited this kind of behavior before and becoming inconsolable.

An MRI was performed on the brain of a killer reveals that they exhibit a range of emotions from joy, fear, frustration, and anger, as well as self-awareness.

Perhaps it’s because mother’s day is tomorrow. But seeing these two documentaries back to back, which are seemingly so diverse, I’m compelled to write about it.

When I was pregnant with Mike, I loved in fear that I might accidentally leave him in his crib and go out shopping. Or worse yet, that I’d accidentally pull a “Raising Arizona” move and leave him on the hood of the car and drive off.

Not every woman wants to have a child. They have my utmost respect for knowing that about themselves. Our ability to bare children does not automatically make us willing and/or capable candidates for the job. As a sex, childbearing is justbthe tip of the iceberg in terms of all the other unique attributes women bring to society and culture.

There are far too many unwanted children in tbe world already who are often left to lead terrifyimg lives at the hands of abusers or by sheer neglect. That’s why (in my opinion) we need to have a choice regarding pregnancy and our own bodies. But this isn’t about that.

I’ve often thought one of thr greatest mysteries of human nature in any culture of the 21st century is how a former victim of child abuse could turn around and inflict that same feeling of helplessness and horror on a their own child. Particularly considering the child initial view of the world is seen through her eyes. One can only hope these kids fund a ray of hope somehow, somewhere and are able to get out from under it. But I digress.

On a lighter note, I am so grateful and happy to be a mom. It changed my life in ways I never would, or could have imagined possible. I’ve always tried to view it as a profound responsibility. (That’s not to say I haven’t messed it up from time to time.)

When considering the importance of motherhood, I’ve often reminded myself that the one thing Mother Theresa, Hitler, and Steve Jobs have in common is, they all had mothers!

Point being, the potential far reaching impact your child could have on the lives of others is profound.It’s a responsibility not to be taken lightly.The impact doesn’t need to be grandiose. Sometimes the smallest gesture can end up being like “the shot heard around the world”.

I’m honored to have had a crack at it! My son is only 26. I guess you could say “the jury’s still out.”  But he hasn’t killed anyone and has managed to stay out of jail!

In truth, I’m extraordinarily proud of the kind, loving, compassionate, intelligent, resourceful, funny man that Mike has proven himself to be, both to me and his longtime friends and loved ones.

Happy Mother’s day to me!

If you find yourself struggling in this day either because you miss your mom, hated your mom, or just long to be one, please know that you are in my thoughts.

And as my mom was known to day to me multiple lousy occasions, “This too shall pass!”

* This is not to negate the efforts of so many, e.g. Frederick Douglass, Harriett Tubman, William Lloyd Garrison, john Brown and Abraham Lincoln, to name a few. My point being, if you had to name a solitary event, her book had the greatest impact.

2 thoughts on “Motherhood…the Ties That Bind”