A young friend of my son’s, (who I’m quite fond of) recently called my attention to a movement called “Women Against Feminism” via Facebook. It had me so worked up, that I couldn’t sleep. These young women are posting selfies on a FB site, stating why they “don’t need feminism!” 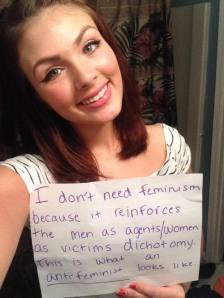 I feel compelled to point out the fact that had it not been for feminism no one would care what these women had to say about anything. As frustrating as I find some of these women’s statements, I have no desire to denigrate them or engage in a dissing contest to bash them. Women are already too polarized. After all, we have alot in common. Like the fact that we all have vaginas! That being said…

My view on feminism is one that is often overlooked. It has always been my position that men cannot possibly be liberated until women become liberated. Providing women with the same opportunities as men, diminishes their burden to be the breadwinner, the decision-maker and the the disciplinarian.

Allow me to illustrate with the following:

My son’s friends have frequently asked if the incidents of sexual harassment on “Mad Men” are exaggerated.  I didn’t enter the workforce until 1979, These were some of my experiences

My first job was in the contract furniture industry with high end designers and manufacturers. Sexual harassment was a daily occurrence.

• As a redhead,  I was frequently asked by my bosses about the color of my pubic hair. When a new client came to visit, they would encourage him to ask, saying  “She won’t tell us!” Then to make matters worse, one of the women designers (another redhead ) encouraged me to answer, as she did. I declined.

• On days when I didn’t have time to finish putting on makeup, I was invariably told by my boss “Before you sit down, go put on your face. Don’t come to work without it!”

• Just prior to taking my vacation, I had reported my boss to the owner.He intentionally left out the fact that teh 125 desks that were ordered would never make the client’s new office move in date as the company was on strike. His lies caused the office manager, a woman, to be fired from her job.  I was told to take my vacation and it would e handled. It was. I arrived home to a letter stating I had been terminated.

• In my efforts to get paid my commission, I contacted my first client for his help with documentation of my sale. He agreed to help me, provided I had sex with him. I declined, forfeiting the commission. I considered telling his lovely wife, but assumed this wasn’t his first time at the rodeo.

My next job was at a North Michigan Avenue law firm.

• One morning my boss stopped by my apartment for a cup of coffee before work. (So I thought). I came out of my bathroom to find him completely naked on my sofa bed. When I freaked out, he laughed at my naïveté as he got dressed. I was fired that afternoon. He was the uncle of a close friend from college. So I didn’t pursue it.

So, yes. I do know something about sexual harassment in the workplace. But that’s not what this is about.

My parents enjoyed an unusually happy marriage, having raised six children, they loved and supported one another to the very end of their lives. As a result of having given birth to six kids, Mom had acquired a strong feminist belief in women’s reproductive rights and rights in general over the years. She was successful in passing her views on to me. So when I was in college, and needed a quick credit to graduate, I chose a course on women and equality, thinking it would be a “no-brainer”.

We had a sociologist as guest speaker one day. She reported that gender studies of newborns in hospitals revealed that mothers were allowed access to, and to hold their female children more frequently and for longer periods of time, then their male counterparts. (Hopefully this is no longer the case. Particularly considering at birth, boys are more fragile than girls). The inequality of this broke my heart!

Let’s take a moment to explore gender roles of men and women in pop culture of the 1950s and 60s.

My favorite example is Ward and June Cleaver.(Leave it to Beaver) June basically lives in the kitchen gadding about all day in heels, a string of pearls, and a dress, waiting for Ward to come home from work to punish the children. (I wonder how many times these words were uttered “Wait til your father gets home!”, In 1950s and 60s sitcoms…)

Ward, on the other hand, is confined to the role of breadwinner and disciplinarian. He puts in a long day at work to come home to find dinner on the table and deal with whatever dilemma his boys were faced with that day. (Because clearly, mom is incapable of handling these many responsibilities?)

In that vein, how many movies and tv shows have told young men and little boys that they were to “be the man of the house until I return” (from battle, work or just vacation.)

I’m not sure what’s worse in that scenario. The idea that a child should take on the role of an adult male in his father’s absence or the suggestion that mother is so inept, (by virtue of the fact that she’s a mere woman) that it is necessary for a child to step in and take the reins  until dad’s return.

Who exactly wins in this scenario? Nobody!

I ask you to consider the fragility of males.

*Men are 4 times more likely to commit suicide than women.  “In the past decade, there has been a substantial increase in suicide in men between the ages of 35 and 64. There was a 28% increase overall.

*Men between the ages of 50 and 59 had a 40% increase.” (Psychology Today) That’s a staggering statistic!

It is believed, this increase is directly relative to financial pressures brought on by a worldwide recession. Forcing men into the role of “breadwinner” doesn’t seem to be working out very well. Does it?

What a surprise to learn that the second primary cause is the use of opiates, medications (legal or otherwise), designed to escape feeling! Heroin use is even on the rise. 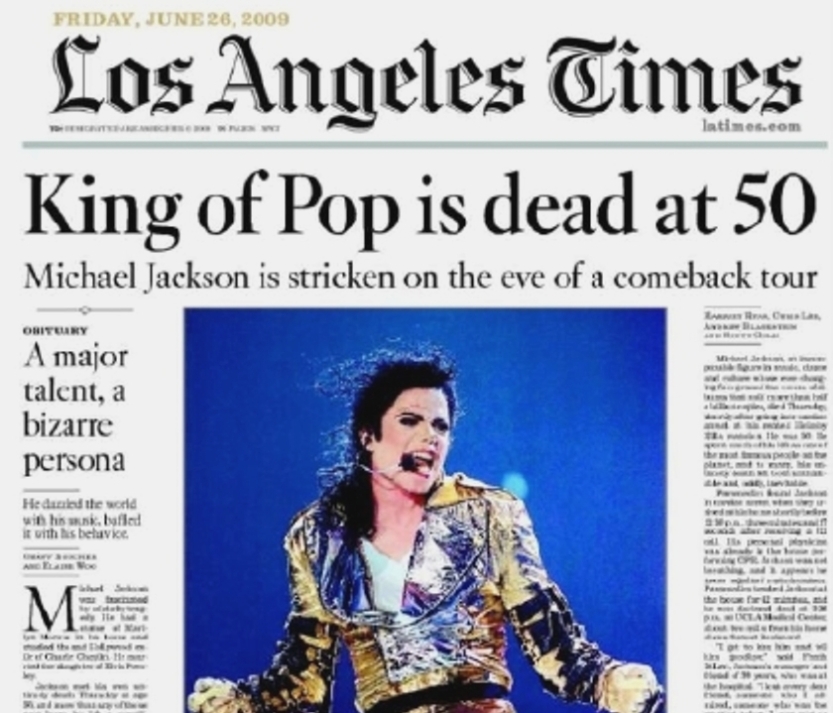 Case in point, the untimely demise of Philip Seymour Hoffman and Heath Ledger… was it really suicide? Or an accidental overdose? While Michael Jackson’s death was clearly the fault of his doctor’s negligence, why was he addicted to these meds in the first place? Clearly his father fit the stereotypical role of disciplinarian. How did that work out? 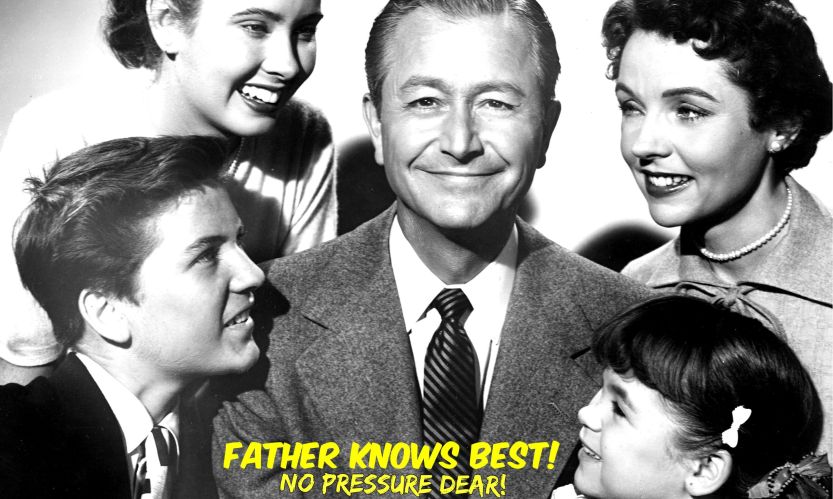 While women may suffer from depression at a higher rate than men, depression is the cause of 90% of suicides. Taking this into consideration, one can’t help but wonder how often men seek help for depression and anxiety. Hmmm… Could it be that admitting to any psychological fragility makes a man feel  less masculine?

*“Drug and alcohol addiction are more prevalent among men than women.”

According to the National Institute on Alcohol Abuse and Alcoholism, men are twice as likely as women to meet the criteria for drug addiction in their lifetime (though rates of prescription drug abuse are about equal). The disparity appears to be even greater for alcohol abuse, with men struggling at 3 times the rate of women.” David Sack M.D.

In addition, because our brain function is so dynamically different, infusing women into higher executive level positions can only serve to enhance society as a whole. Vive La Difference!

This is evidenced by the international and revolutionary impact made by Women Against Breast Cancer, on fundraising. The fundraising model, created by these women who were on a mission to beat this disease, has been copied by AIDS and every imaginable form of cause fundraising..

In 2013, women held only 14.6% of the executive officer positions in Fortune 500 companies. My question is why? Evidently the 77% wage gap is a myth based on lousy data. It’s more like 84 % and that narrows significantly with recent college grads, to 92%.

Before quitting my business, I can’t tell you how many clients and vendors complained of staff layoffs, increasing the workload of the remaining staff. Frankly, women are better multi-taskers and as such, are more likely to succeed when dumped with extra work. Which may explain the recent narrowing of the gap. However, it does not account for the lack of women’s presence in high level executive positions.

17% of the members of Congress are women. Yet women comprise 50.8% of the population. Whatever happened to “no taxation without representation”?

Infanticide of female children still occurs in India and China. As tragic and horrific as this is, it is usually born of an economic survival strategy. In these cultures, boys are far more likely to be integrated into the workforce, enabling them to contribute economically to the family structure.

I could go on and on with statistics about the gender gap. There’s no question but that it exists. The real question, is why?

With the tremendous surge in technology and its role in our culture, life is moving at a far more rapid pace than it did in the 1950s and 60s.

This should be a cause for action. The only viable solution I can see is to bridge the gender gap by relieving pressure from men and allowing women greater  latitude in the managing of our collective lives.

If anyone thinks that feminism hasn’t effected change, please check out this little video I’ve created…

If you have an opinion, by all means EXPRESS IT HERE! Tomorrow I will post my “Selfie” and my “I NEED FEMINISM BECAUSE…statement. (I can’t use  my camera at the moment. So it will be tomorrow.)

This movement is building steam. So if you’re feeling so inclined, PLEASE ADD YOUR SELFIE TO THE MIX! You don;t have to be a female either!!!!

Thanks for reading, commenting and sharing!

27 thoughts on “What’s Your Reponse to “Women Against Feminism”? Here’sMine…”